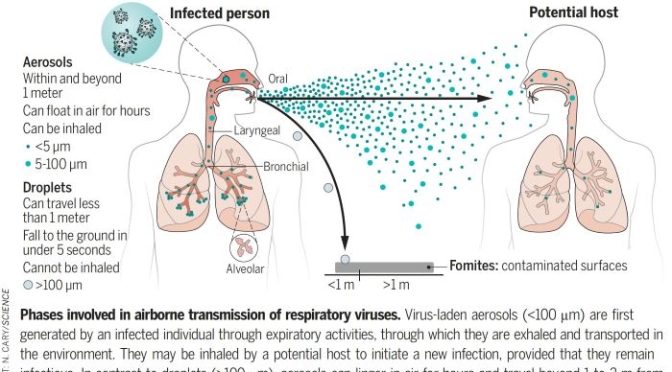 In a very good article, the Journal ‘Science’ has collated a lot of basic science regarding aerosol transmissions in viral infection generally, and Covid-19 in particular.

Early in the epidemic, I thought that large droplet transmission, which fell to the floor, and was transmitted by fomites and hand autoinoculation into the respiratory membranes, was more important. The main thesis of the article is that it is not large droplets, but aerosol particles that mainly transmit.

The secondary assertion is that aerosols can be up to 100 µm microns in diameter and still be transmitted by inhalation. they also stated that particle size of equal or less than 5 µm contain more virus particles than all the larger particles put together in spite of the greater mass of the larger particles . Normal speaking creates about 1000 aerosol particles per minute, And normal breathing about 7200 aerosol particles per liter of exhaled  air. Coughing is more sporadic and tends to produce the larger droplets which don’t stay airborne as long, but I wouldn’t count on it.

There is a tremendous difference between individuals as to the number of particles they generate. It’s estimated that 10 to 20% of individuals account for 80 to 90% of the virus.

Slide number two  deals with viral load and infectivity which is a function of the pH value, electrical charge, and other characteristics of the virus. An important point is that even though there is lots of viral RNA, that doesn’t mean that the virus is infective. Once again there’s a tremendous difference between the infective viable virus content of the aerosols from infected patient to patient. He stated that in one room with two Covid patients, they were 6 to 74 TCID/50 per liter, which means you’re almost certain to be infected if you don’t have a mask that filters out the virus, or some kind of purification in the room.

The fourth slide talks about factors affecting the distribution of indoor aerosols. There may be certain parts of the room where the particles congregate , depending on the ventilation type, whether natural, mechanical or filtered, flow patterns within the room, and indoor filtration and killing devices such as ultraviolet light.

Mention is made of the CO2 level in the room as a measure of air circulation. There is a higher CO2 in the air with lots of people and poor ventilation. The recommendation is that 7-8 ppm is about the highest acceptable level, and the possibility of using a portable HEPA filter would not be a bad idea for people frequenting indoor restaurants. Of course, outdoor air with its breezes, dispersion, less humidity, higher ultraviolet and usually Greater dispersion of people is preferable to indoor contact.

Some other interesting points are that children produce less aerosol particles because they have a smaller number of bronchi. I thought the bacteria were less likely to be aerosol transmitted than viruses, but they state that the R0 of tuberculosis can be as high as 4.3, vs. 7-8 for covid. The typical tuberculosis bacillus is relatively large, and yet is only 2 µm in length, well within the size of an aerosol particle.