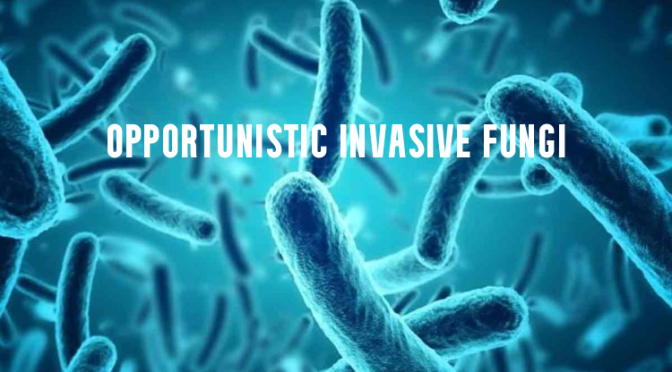 Fungi are in the outside air, the inside air, and even the air of isolation units In hospitals. The normal human respiratory tract is able to breathe these fungi in, have them deposited on the mucous membrane surfaces and have no problem. The normal respiratory membranes, with their associated cleansing cilia and normal mucus production are able to sweep the invaders out without sustaining any harm.

Problems arise when the respiratory tract is functionally or structurally abnormal, such as in cystic fibrosis, bronchiectasis and COPD. Immunocompromised conditions have been increasing in frequency with the improvement in medical care in recent years. Intravascular catheters and sensors can provide a resting place for pathogens including fungi, as can cavities, scars and other damage to the lung. The immune system may require suppression to accommodate an organ transplants or ameliorate autoimmune conditions.

Cancers, especially of the hematologic or lymphatic system, such as lymphomas, pose a definite problem. Severe burns and  malnutrition may weaken the immune system, as may Viral infections, especially AIDS, and more recently COVID-19. More subtle immune problems may arise with diabetes, Obesity, or even a lack of sleep and exercise.

These and other conditions give the fungal infections the OPPORTUNITY to invade the body, and a few dozen of the thousands of species of fungi proceed to do just that. Opportunistic fungi often have special features, depending upon the species. Most prefer the respiratory tract, and if they get in to the bloodstream can go to their favored spots.

Aspergillus, and coccidiomycosis , for instance, prefer the lung. Mucormycosis often involves the sinuses and eyes. Blastomycosis can involve bone. Sporothrix is often found infecting the skin.

Symptoms depend upon the area involved. Of course if it’s a respiratory tract, you have coughing, mucus production, sometimes shortness of breath. With the central nervous system you have headache and confusion. You can see the involvement in the skin.

The number of drugs available to fight fungal infection is fairly limited, and currently involves only three different classes. Many fungi are resistant to one or two of these classes, and can be problematic.
However, fungi do not as a rule spread through the air from person to person, and a true epidemic would be unlikely.