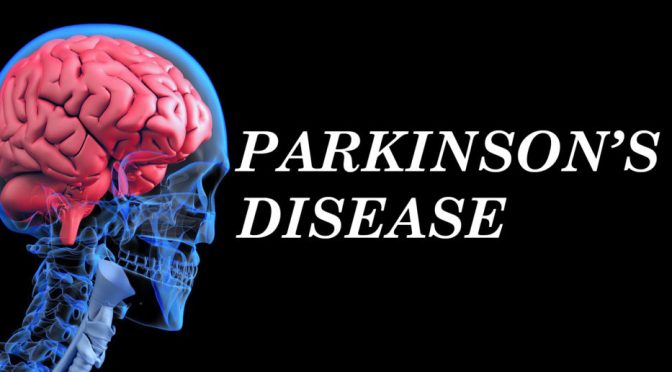 Parkinson’s Disease is a MOVEMENT DISORDER. It is grouped with a number of OTHER NEURODEGENERATIVE illnesses which can show similar symptoms. When Parkinson-like problems are present in other syndromes, it is called PARKINSONISM, to distinguish it from primary Parkinson’s disease.

There is no 100% reliable sign, symptom or diagnostic test; Rather, the gold standard of diagnosis rests on the ability of experienced neurologists to discern a PATTERN of findings which together support the likelihood of Parkinson’s disease. The accuracy is about 80-90%. The 3 characteristic symptoms of PD are BRADYKINESIA, TREMOR, and RIGIDITY. Bradykinesia means SLOW MOVEMENT.

The typical Tremor is a tapping, “pill-rolling” motion that is present at rest, and DISAPPEARS ON MOTION. The Rigidity is pervasive, and patients describe it as trying to move in thick molasses. A “lead-pipe resistance”, stiffness and PAIN in the shoulder may be a first system, and not uncommonly the patient will often go to an Orthopedist or Rheumatologist. Depression, constipation, anosmia and SLEEP Disorders are common in the years leading up to the diagnosis of Parkinson’s Disease, and DEMENTIA frequently develops.

Genetics play a role, and PD can run in Families. Environmental causes such as Trauma and anoxia can injure nerve cells, as can Toxins. MPTP contamination of a drug supply once caused a surge of Parkinsonism. Degeneration of DOPAMINERGIC nerve cells in the Substantia Nigra is the ultimate cause of PD, and accumulation of ALPHA SYNUCLEIN fibrils is a correlate of that degeneration.

Practical treatment at present aims to boost Dopamine. Administration of Levodopa, a DA precursor, if effective, a response helps to confirm the diagnosis. Magnetic and electrical stimulation of the brain have been used. Experimental injections of Dopaminergic cells into the brain is under investigation. Causing Astrocytes to differentiate into dopaminergic cells has been successful in animals.

With Celebrities such as Michael Fox and Robin Williams raising awareness, and the Mechanism understood, I am optimistic that a real cure may be found in a few years.